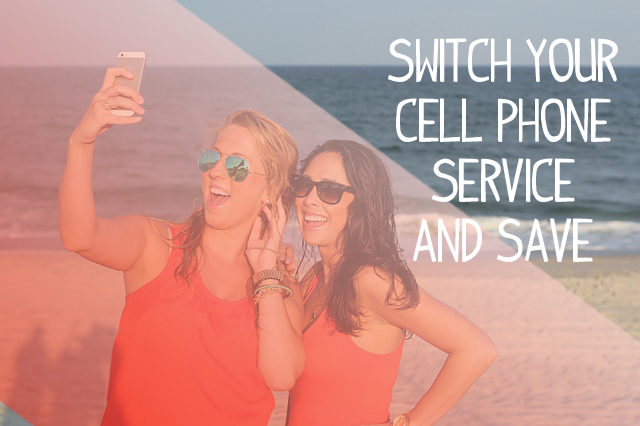 In the past, saving on your cell phone bill by switching to a discount carrier was not much of an option for most people. There was a reason the smaller, cheaper companies were more inexpensive: service was spotty at best, dropped calls were common, and the phones were far from top of the line.

Larger cell phone providers, like AT&T, Verizon, and Sprint, offered the best service and provided great deals on the latest smartphones. Signing up for a two-year contract often meant a steep discount of hundreds of dollars off the retail price of the Apple and Android smartphones everyone wanted to have.

But those contracts were, as you undoubtedly know, difficult (and expensive) to break. You couldn’t just change your plan anytime you felt like it — or needed to because of a busted budget.

People want phones that can do it all and highly dependable service 24/7, no matter where they go. So a ton of people have put up with bad customer service and smartphone plans that run anywhere between $100 and $200 per household, because they felt like there were no good alternatives on the market.

Thanks to Republic Wireless, however, that’s changing.

What Is Republic Wireless?

Republic Wireless is a company that offers smartphones with no-contract, low-cost plans. It’s a great alternative for anyone who wants the cool phone and the great service, but is ready to start saving on their monthly expenses — including their cell phone bills.

What Do They Offer?

With Republic Wireless, you can choose between two smartphones and four different cell phone plans. Let’s look at the phones first:

The Moto X is a top-of-the-line smartphone with specs on par with some of the best devices available on the market. It has 16 GB of internal memory, a 4.7 inch display, and a 10 MP camera. It runs off Android’s Jelly Bean operating system.

The Moto X will likely be your first choice; it is the better of the two smartphones Republic offers. However, you’ll need to buy either phone you get outright and the Moto X is more expensive. It starts at $299.

The Moto G comes with less features and is running on an older operating system, but it’s a big step down in price. At only $149, it’s a great budget option for anyone who simply needs basic smartphone functionality.

Now, let’s take a look at the plans you can pair your smartphone with:

Remember, Republic Wireless offers no-contract service. And on top of that, they allow you to switch back and forth between plans up to twice a month. That’s awesome flexibility!

How Does Republic Wireless Offer Cheap Cell Phone Plans with No Contracts?

There are a few things about Republic Wireless that make them really unique. These innovative features are what enable the company to provide a good product at an even better price for consumers.

The biggest thing to understand is all that Wi-Fi discussed in the plans above. Republic Wireless’ two models of smartphones are specifically made to run off Wi-Fi connections first. This means that, even with plans where you have access to cellular service, your phone will connect and run off Wi-Fi if it can find and get on a signal.

Both phones are also designed to seamlessly switch between Internet connectivity and cellular service. And no, switching back and forth doesn’t cost you any extra.

That’s the main reason why Republic can offer smartphones and plans at low prices. They don’t have their own network for cellular service, but “rent” from Sprint when their users need access to cell.

Another reason why plans are so cheap? Because the business was designed to run off low overheads. They’re based primarily online, meaning everything you do as a customer is online, too.

Neither one of these aspects is a negative; it’s just different than many other companies we’re used to dealing with.

My Experience with Republic Wireless

So you may be thinking at this point that I’ve been paid by Republic Wireless to write this blog. Wrong!

I was tied to Verizon Wireless for years and hated seeing the bill creep up each month. I heard about Republic Wireless from my father about a year ago but I wasn’t able to transfer my number. This year I checked back and the transfer was possible.

Cell Service: The Wi-Fi option for cell service attracted me because I’m usually at an office or on my back deck where I can be connected. I have had a few dropped calls and a couple times where the call ended before it started ringing. Overall, I’d say that I have been pleased with Wi-Fi.

What about outside the office, you say? Well I live in New Hampshire, just outside a city, so the cell phone service is a bit spotty at times. Although, I don’t remember having many dropped calls — just times where there hasn’t been any service.

I travel around the state and get perfect service in bigger towns. Sometimes I have to head down to Boston Massachusetts and the service is awesome there.

In speaking with others who’ve also tried Republic, their experiences have been similar. Those in areas like Boston MA — big cities with no shortage of free Wi-Fi hotspots or coverage — are really happy with the quality of service they get for the price they’re paying.

Being outside a major city like Boston doesn’t mean Republic won’t be great for you, too, but be sure to check the coverage map before making the switch so you know what to expect when not on Wi-Fi at home or your office.

Phone: I choose to go with the Moto G, but chose the 16 GB phone. The total cost with shipping and a protective shell for the phone was about $200.
The last phone I had was the iPhone 4s and I’m much happier with the Moto G. It has a bigger screen and the camera takes much better photos. If you’re moving from Apple to Android, it will take a little time to get used to.

The one thing I regret not getting is a film protector. I dropped it on some gravel and the screen broke. Everything works fine, it just looks like I have spider webs on my phone!

Plan: I am on the $25 plan and with taxes comes to about $29. I haven’t moved up or down any of the plans because for me this suits me well. I’ve never had 4G so I can’t miss what I’ve never experienced!

Overall: For the price I will have to say that you can’t beat it. I pay less than $30 a month and get a great phone and good service. Verizon Wireless has better service in my area but I don’t feel it is worth paying more than double.

So check it out and let me know if it’s worth saving!