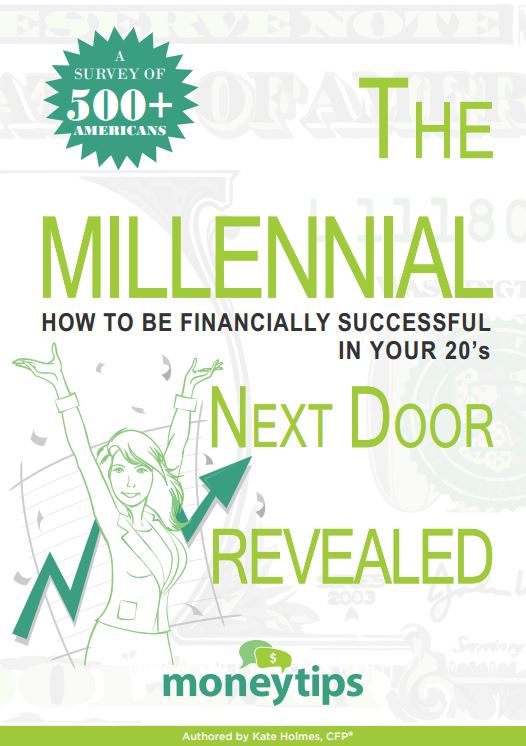 With all the flak Gen Y received a few years ago about being a spoiled, lazy generation that didn’t know a thing about money, you may be surprised to learn that Millennials are actually quite in tune to finances. And they want to succeed.

A recent survey put together by Money Tips CEO Marc Diana and Kate Holmes, CFP® of Belmore Financial shows that successful Millennials are saving and meeting other big financial goals, too (click here to download for free!).

What Defines a Successful Millennial?

The survey considered an individual a successful Millennial if they reported being comfortable with their standard of living. The majority of the Gen Yers in the study made between $25,000 and $75,000 and 60% have less than $10,000 in debt.

This group is highly educated, with 89% holding some form of higher education degree — and 71%  helped pay for those education costs.

And a huge 91% of the group interviewed said they were financially literate.

Why Success at Setting Financial Goals Means Something

In addition, 87% of Millennials have set financial goals and have made some degree of progress. This is no small feat for a generation that came of age, graduated college, and tried to start their careers in the worst economic and job markets since the Great Depression.

Much has changed from the Baby Boomers to Generation Y, and the fact that Millennials are not only on their own two feet, but also saving, setting and achieving goals, and making finances a priority to get right is a big deal.

Whereas Baby Boomers had a clear-cut path, Gen Y does not. It’s not enough to get a nice, entry-level job, work your way up the ranks for decades, and retire to collect your pension that was granted to all workers, public and private alike.

Millennials have to figure all this out on our own. There are no more pensions and it’s rare to find someone who has worked the same job for 3 years in a row, much less an entire working career with one company.

Retirement is no longer something that’s taken care of and there’s no obvious path to financial and career success. Gen Y forges their own path, and they’re doing it pretty well. The fact that they’re asking questions, setting goals, and handling their financial situations all on their own attests to that.

All things considered, Millennials are doing great despite a dubious start to adulthood (when they had to deal with a crummy job market and the Great Recession). However, there’s still progress that needs to be made.

While the top financial concern for Gen Y was saving enough to live comfortably in retirement, this group only saves 7% of their income for that period of their lives. And for the most part, it’s all in cash.

Millennials need to understand the importance of increasing their contributions not just to savings, but to investments. They must also understand how and where to invest their money for growth and continued success.

A full 71% of Millennials from the survey say they make their own investment decisions. It might be time to admit that a little help could go a long way.

Gen Yers who want to alleviate their financial worries and start doing more with their money can benefit from working with a fee-only financial planner who can show them the best way to maximize their earnings and what they save. Millennials can rest easier if they choose a financial professional who also works as their fiduciary — which means they swear to always put the needs and interests of their clients ahead of anything else.