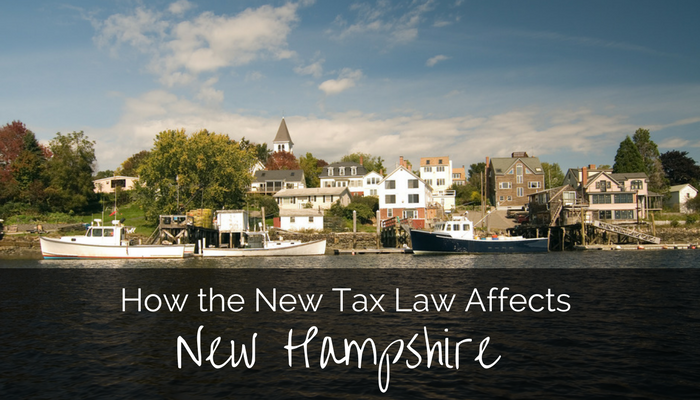 The Tax Cuts and Jobs Act is now in effect, and it brings some specific concerns for the Granite State. If you live in New Hampshire, here are what some of the changes mean for you:

That means that anyone who has itemized deductions below that amount, they’ll likely opt for the standard deduction instead.

New Hampshire may not have a personal income tax or sales tax, but it does have some of the highest property taxes in the nation. The key to saving the most money with this new tax law is to pay attention, and see whether standard or itemized deductions will save you the most money on your taxes.

If you decide to itemize, remember that your property tax deductions are capped at $10,000. Depending on your situation, it might make more sense to opt for the standard deduction.

Some New Hampshire citizens prepaid property taxes at the end of 2017 to take advantage of those deductions. Remember that the only way that prepayment is deductible is if your 2018 taxes were assessed in 2017. Additionally, New Hampshire state law dictates that property tax prepayments are allowed up to two years in advance – but only if your town or city adopted that provision.

So if you did prepay your property taxes with the hope that you can deduct it on your taxes, make sure you contact your town or city to verify that prepayment is deductible. After that, you can verify with your accountant.

The Earned Income Tax Credit (EITC) is an income-based, refundable tax credit that is meant to support low-to-moderate earners, especially those with children. On a recent NHPR The Exchange episode, Senior Director of 2-1-1 NH & Asset Building Strategies at Granite United Way Cary Gladstone said a surprising number of New Hampshire residents do not take advantage of that credit.

“The IRS states that up to 20% of workers in New Hampshire who qualify for the credit do not claim it for a variety of reasons,” he said. “That’s about $31 million left unclaimed by New Hampshire’s most vulnerable members of the workforce.”

There are no changes to the EITC. However, residents should know that because it is a credit, not a deduction, it still applies for low-income parents who take the new standard deduction on their taxes.

Small businesses employ more than half of New Hampshire’s employees. There are some specific cuts for designated pass-through businesses, which includes entities like partnerships, S-corporations and sole proprietorships.

The business income deduction for small businesses is dropping from about 35% to about 20%. That deduction is available to all qualified businesses, as long as the owner’s taxable income is below $157,500 (or $315,000 if they are married.) Beyond that threshold, certain entrepreneurs may be excluded. This could include doctors, lawyers and financial advisors, if they or their spouse make too much money.

There is some concern that if people stop using itemized deductions, they might shy away from donating money to charities.

Gladstone said it’s possible charities will suffer, but no one will know until next year how the new tax law will impact giving.

“The average donor gives $156 per year, and most do itemize,” he said. “People will have to ask themselves, ‘If I get this tax break because I itemize, do I give as much without this tax break?”

We will have to wait and see how the Tax Cuts and Jobs Act plays out in New Hampshire over the coming years. William Ardinger, Director of the Tax Practice Group at Rath, Young and Pignatelli, PC., also spoke on The Exchange about the tax law. He said that ultimately, New Hampshire stands to benefit from this tax law in very significant ways.

“The cost of our homes is not as high as they are in [somewhere like] San Francisco, our property tax costs are high – make no mistake about it – but they’re on houses that are valued at substantially less than they are in Greenwich, Ct. And then the fact that we have so many small businesses organized as pass-through entities, this provision, which is so complex, is going to be the subject of continuing change,” he said.

“This could really be a kick to the bottom line of small business owners.”

Latest From The Blog

Search for past articles:

We would love to hear from you and help you accomplish your financial goals today.

We also offer virtual meetings through Skype or Google Hangouts.