You may have heard a lot of talk about the yield curve inverting at the end of March, and what that could mean.

Historically, an inverted yield curve has often signaled an upcoming recession. I’ll talk about the most recent inversion later, but first, here are some definitions to keep in mind.

What is a Yield Curve Inversion?

The yield curve plots bond interest rates by maturity on a graph. Those bonds are typically U.S. treasuries. 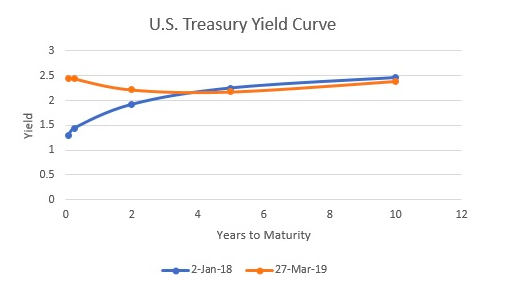 What you normally see are yields with shorter dates that are less than yields with longer dates. That makes an upward slope, as investors get higher rates on longer-term bonds. A slope upward means investors expect growth to continue. Think of it like a certificate of deposit (CD); the longer the CD, the higher rate you should get for waiting.

In an inverted graph, that means those longer-term bonds have a shorter yield compared to short-term bonds. That can signify that investors are less confident in long-term growth, and therefore investing less money into long-term projects. This may be a signal to the market that money could be freezing up.

Does an Inverted Yield Curve always proceed a recession?

Historically, they usually do.

That consistency is what makes the yield curve inversion a reliable recession forecast.

Is this a telltale sign that we’re headed for a recession?

Not necessarily. Like former chair of the Federal Reserve Janet Yellen told CNBC recently, “it might signal that the Fed would at some point need to cut rates, but it certainly doesn’t signal that this is a set of developments that would necessarily cause a recession.”

However, the December 2018 dip on the 3-year and 5-year spread, followed by the 10-year dip in March, can be a reliable signal for a recession, according to the Federal Reserve Bank of Cleveland. It has been in the past.

How this plays out is anybody’s guess, but using smart investment strategies in case of a potential recession is a good start.

How should you prepare?

The only guarantee that you have as an investor is that change is unavoidable. There will absolutely be highs and lows in the economy over time. What we don’t know is the magnitude of the next potential recession. The recession that began in 2007 was deeply impactful for so many people. If another one hits, it might not be as painful as the Great Recession.

For now, there are some basic rules of thumb you can adopt to protect your investments:

Remember that most people lose out when they move to cash to avoid a dip. Your best course of action is to keep your allocation within its target and don’t let your emotions get the best of you.